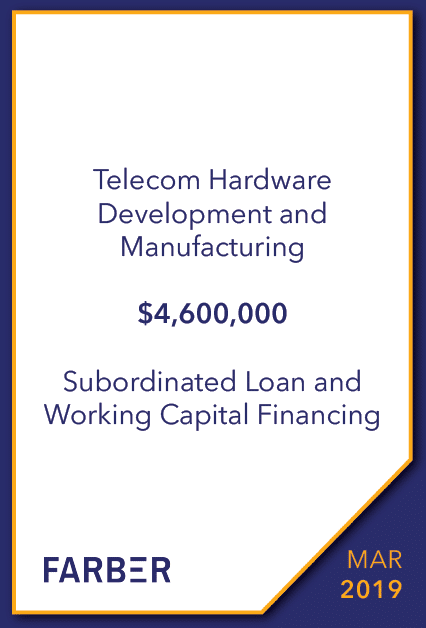 Background
The telecom industry in North America has seen much upheaval over the last few years as service providers purchase competitors to expand their networks and revenue stream at a faster pace. Increasing competition has also led to price reductions and stalled infrastructure investments by many of the smaller companies in the U.S.

Under these circumstances, our Canadian client, with a significant U.S. clientele, was facing declining revenues due to these market trends. However, a new product of theirs was in the final stages of development and a large telecom provider was ready to implement this innovative product. The product would significantly enhance their 4G network in the short-term and provide the basis for their new 5G network. This was a technology that could potentially disrupt the marketplace and allow the company to regain revenues and profitability quickly.

The client was seeking financing of $4.6M that would help fund the final six-month development period until initial orders. A bank term sheet was already in hand, but they sought to determine what other prospective debt financings could be available to them. A review of the term sheet concluded that alternative financing could likely be found, with more favourable terms.

Challenge
A financing solution that would completely meet their requirements was not straightforward. Even though large orders were potentially imminent, development expenditures for the new product had been significant, the company had become unprofitable, and cash reserves were running out. The new lender had to be willing to go interest only for the first 12 months until revenue materialized. Furthermore, worst-case scenarios for the new product implementation still needed to be modeled out for the client in order for potential lenders to have visibility on principal repayment.

Solution
Specialty lenders were required that could understand this niche type of financing. A complete information package was developed addressing the various possible concerns of these lenders, and illustrating the various scenarios. This included a detailed history and background of the company and its past product success. Furthermore, it also provided an in-depth analysis of cash flow projections. Of particular importance was a detailing of go forward project milestones to complete the new product’s development, such that the lender could gauge the inevitability of completion. Lenders could then understand how the client would deliver on the project and, importantly, service and repay the loan facilities.

Result
The company was able to raise more debt than initially planned. The debt facilities were structured as a combination of senior SR&ED financing and a subordinated venture term loan from two different non-traditional specialized lenders. These two new facilities were tailored to suit the requirements of the company. The client ended up with a total of $4.6M in debt provided by two very supportive lenders. The lenders were convinced that the company had weathered the ups and downs of the technology sector and was moving forward with a new product that would disrupt the marketplace.

Sign up and receive our latest Debt Financing Insights

Get emails from our experts in Technology or Debt Financing.